President Muhammadu Buhari has arrived Lagos on a one-day working visit to the state where he is scheduled to commission some projects embarked upon by Akinwunmi Ambode’s government.

The president and his entourage landed at the presidential wing of the Murtala Muhammed Airport, Lagos at 10.32 am amid tight security.

The report said the president arrived aboard a Nigerian Air Force Boeing aircraft with registration number 5N-FGT and was welcomed with a dance by cultural troupe and a ‘Presidential Guard of Honour’.

President @MBuhari is in Lagos to commission a number of projects. He will be in Maiduguri, Borno State tomorrow. #PMBinLagos #PMBinBorno pic.twitter.com/8ISIVtShIt

The President upon his arrival was received by the state governor, Akinwunmi Ambode, his Oyo and Ondo counterparts, Abiola Ajimobi and Rotimi Akeredolu of Ondo state. The deputy governor of Edo, Phillip Shuaibu, was also present. Others who received the president at the airport are the Lagos state governor-elect, Babajide Sanwo-Olu, his deputy, Obafemi Hamzat as well as top security chiefs. 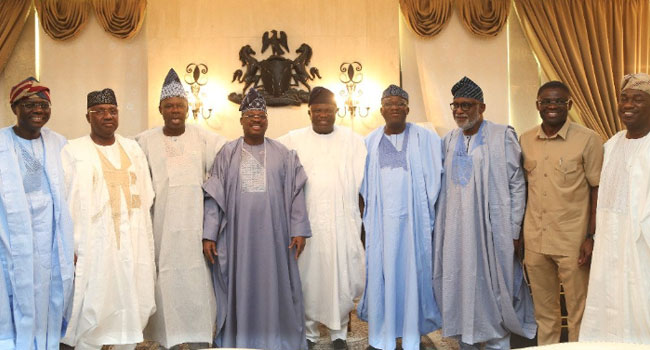 President Buhari’s visit is expected to last between the hours 11:00 am and 3:00 pm, during which traffic will be diverted on some key routes around Ikeja and its environs.

The projects expected to be commissioned by the President include; the reconstruction of the Oshodi International Airport Road, Oshodi Transport Interchange, 820 mass transit buses, an ultra modern 170- bed Obstetrics and Gynaecology specialist hospital located within the premises of the Lagos University Teaching Hospital (LASUTH), Ikeja and The Eko Theatre.