The reality star-turned-aspiring lawyer and her sister, Kourtney Kardashian, continued their trip to Armenia on Tuesday night with a fancy dinner alongside Armenian President Armen Sarkissia.

In one photo, the famous sisters, both wearing black suits, sat at the dinner table on either side of Sarkissian, who opted for a suit and tie.

Kim, 38, and Kourtney, 40, posed together in another photo, standing in front of the insignia for Armenia. A third photo showed the sisters again on either side of the president, 66, as they walked through a hallway together.

Earlier this year, Kim famously spoke at the White House alongside U.S. President Donald Trump. She had worked alongside the Republican president to free Alice Marie Johnson, a nonviolent drug offender, from prison. Kim and Trump also worked together to pass the First Step Act, significant reform to the criminal justice program in the U.S.

The mother of four baptized her three youngest children – Psalm, 4 months, Chicago, 20 months, and Saint, 3½ – on Monday morning at the Etchmiadzin Cathedral in Vagharshapat, Armenia, as their aunt Kourtney and her kids (Reign Aston, 4½, Penelope Scotland, 7, and Mason Dash, 9½) joined them for the ceremony.

Video footage on one Instagram account showed Kim walking to the ceremony with all three of her younger kids plus her eldest, 6-year-old daughter North, followed by Kourtney and her three children. In a clip on her Instagram Story, the KKW Beauty founder held Psalm as they walked toward the cathedral.

Kim and Kourtney are reportedly staying with their kids in the nearby capital city of Yerevan, pointing out that the “Etchmiadzin Cathedral is the mother church of the Armenian Apostolic Church.”

Kim expressed her excitement over the trip last weekend, captioning a throwback photo of herself and the Poosh founder, “We’re going to Armenia.” She also previously tweeted about her other reasons for traveling to her father’s family’s country of origin, writing late last month that she “hope(s) to seek ways I can help increase trade and hopefully create jobs for Armenians which includes @skims production there in the future.”

“As a brand, we believe in embracing all people and as an individual I have been working towards broader goals in hopes of bringing forward the recognition of the Armenian genocide which I remain very passionate about,” Kim added in a separate tweet. 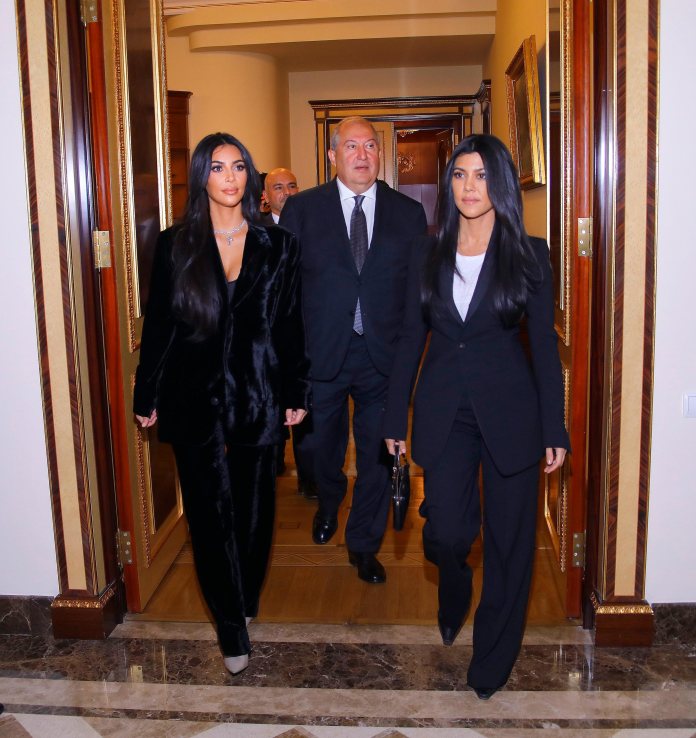