Popular gay Nigerian cleric, Jide Macaulay, will, in June, be ordained an Anglican priest by the Church of England come June.

Macaulay revealed this on his Instagram page on Wednesday where he also posted a copy of his invitation letter.

He wrote, ‘It is a delight to share this news. I am to be ordained Anglican Priest in the Church of England in June 2019. 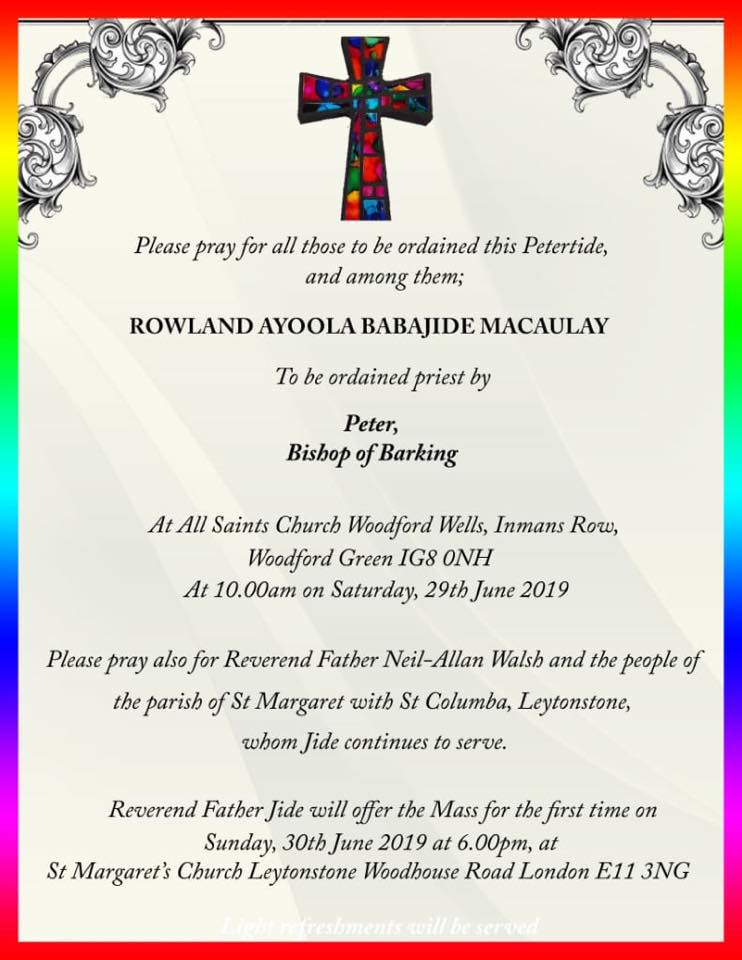 Macaulay was born on November 4, 1965. He is a pastor an ordained minister, an LGBTQ, human rights and HIV/AIDS activist, community builder, queer theologian, lawyer, and parent.

Macaulay founded House of Rainbow, Nigeria’s first house of worship catering to the LGBTQ community, and currently serves as its executive director.

Macaulay, who is HIV-positive, also comes from a family of clerics.

His father, August Olakunle Macaulay, is a theologian, principal, the founder of United Bible University, and president of the Association of Christian Theologians in Nigeria.

Macaulay studied at several primary and secondary schools in Nigeria, and graduated in 1986.

While in school, he was involved in several drama and poetry activities, and later set up the Poetry Inspired Club for young people.

Macaulay was also interested in music and directing but soon lost passion for both and began to focus on his theological development.

According to Ubuntubiographyproject.com, Macaulay’s Christian upbringing had always forced him into a different understanding of same-sex relations, and he married a woman under the guise of spiritual healing at the age of 24.

While Macaulay experienced same-gender relationships and desires before marriage, it was not until after his divorce in 1994 that he fully came out as gay, with a great effort to reconcile his faith, spirituality, culture, and sexuality.

Macaulay worked for Crown Prosecution Service from 1987 to 1999, where his career rose from administrator to legal executive. He then went to work with PricewaterhouseCoopers as an IT procurement manager, became self-employed in 2001, and decided to combine his career with developing his passion and preparation for full-time Christian ministry.

On September 2, 2006, Macaulay founded House of Rainbow Fellowship, “an inclusive, welcoming and affirming religious community to all people, including sexual minorities and marginalised people.”

In 2003 and 2007, Macaulay was honoured as Man of the Year by the UK Black LGBT for his role in helping LGBT people of faith.

He was shortlisted for the National Diversity Award in 2014 for being a positive role model in the category of Race, Faith and Religion, and won the OSCARS MSM HIV Award in 2014, and the Open and Affirming Courage Award and the United Church of Christ Recognition Award, both in 2017.