Controversial Nollywood actor, Uche Maduagwu, has slammed popular Nigerian singer, David Adeleke, also known as ”Davido” for saying that he doesn’t get love and support from the entertainment industry because of his dad’s wealth.

Speaking via his Instagram page, on Wednesday, the Nollywood actor said nobody hates on him because of his father’s wealth but rather they just love Wizkid’s song more than his.

Nobody hate on you because of your fathers MONEY, Nigerians just LOVE @wizkidayo songs better than yours… Oga, dont get it twisted, you are not the only child of a billionaire father in this #industry,  so, its laughable for you to assume people hate you because of your fathers money,  Nigerians are not enemies of progress, maybe, if you start being HUMBLE and stop behaving like this #Naija music industry is your birthright,  maybe, Nigerians, including your colleague, will start showing you much #love to cover for the deficit in your #music compared to that of #Wizkid who got featured on Beyonce #LionKing album.  #Hello, i have gotten @chrissyteigen attention in #America,  Oga, have you asked Nigerians why they crowned Wizkid the KING of #Nigeria and #African music instead of you? 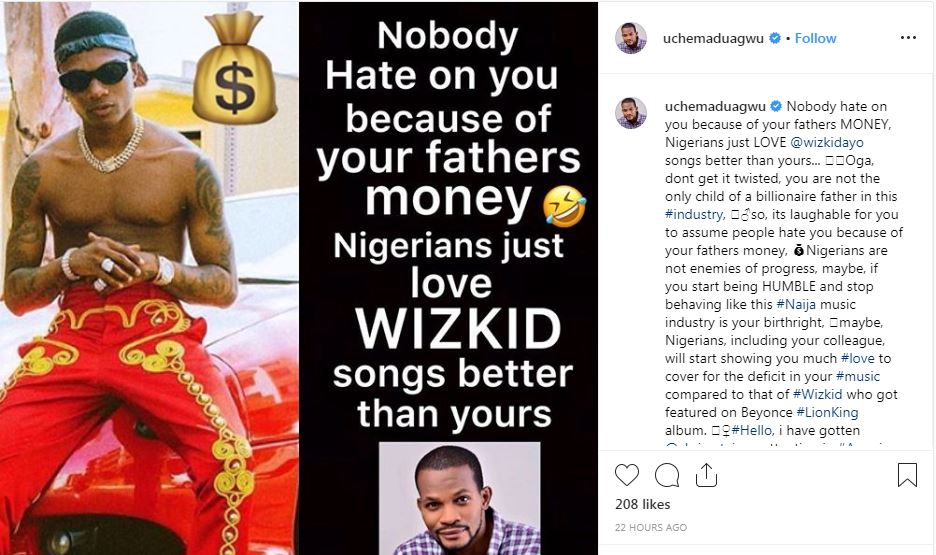 Just recently, popular music star, Davido  revealed that throughout his 7 years in the music industry, he has received nothing but hate.

In a recent video he shared thanking his fans and supporters for the love on his most recent work, Blow my mind featuring American singer Chris Brown, Davido opened up on why he has received only hate since he came into the music industry.