A civil rights group, Coalition for Civil Rights and Good Governance has raised an alarm over the worrisome activities of foreign non-governmental organizations in the NorthEast.

The group made this revelation in a press conference on Monday in Abuja to demand the probe of these international NGOs.

In a statement signed by its convener, Princess Ajibola, the coalition said it had taken time to review and evaluate the recent developments in the NorthEast and found these supposed humanitarian groups culpable of supporting insurgency.

It further revealed that these NGOs gained accreditation to the region under the guise of philanthropic work only to do the opposite – serving as puppet in the hands of the Boko Haram terrorists.

The group reckoned that this show of shame has dampened the integrity and credibility of the indigenous NGOs in the region.

In addition to the current probe by security and anti-graft agencies, the group therefore called on the National Assembly to carry out a comprehensive investigation into the activities of these International NGOs.

According to the Coalition, it is only through the means the reasons why these groups suddenly resorted to providing cover for terrorists would be revealed. 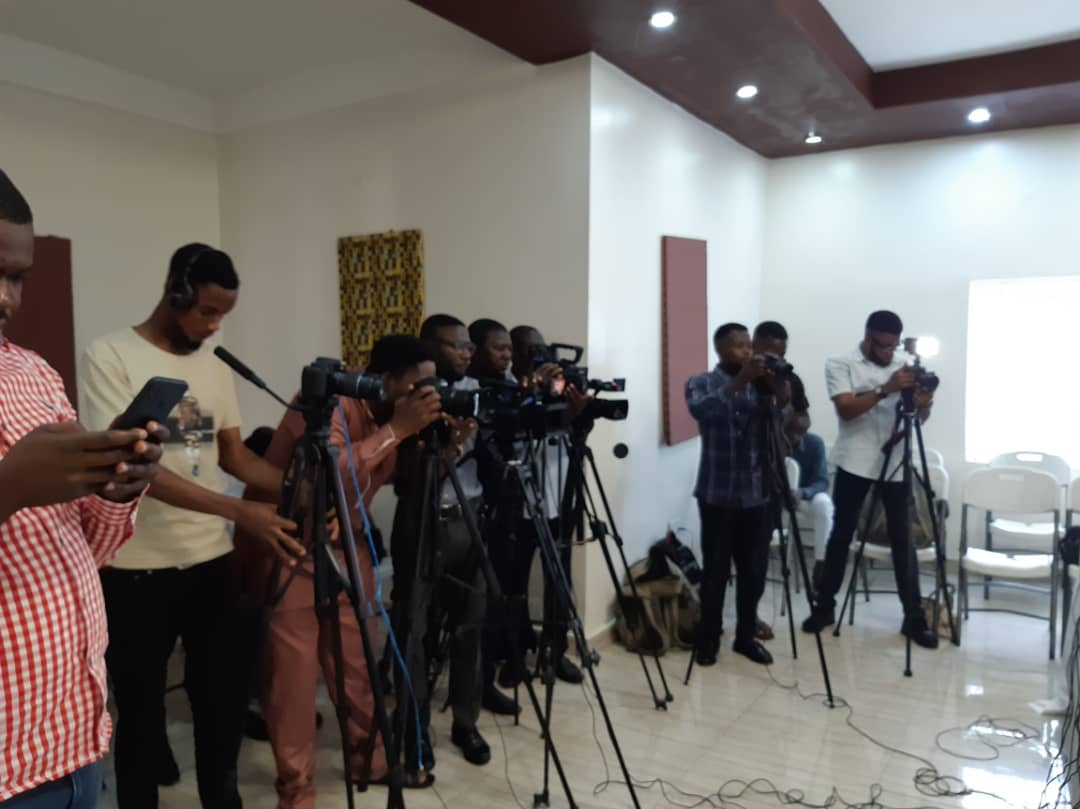 Gentlemen, the Coalition for Civil Rights and Good Governance has taken time to review and evaluate the recent developments in the northeast of the country, notable Borno state, where there are military operations to dislodge what is left of the Boko Haram insurgency. That also include the operations against the Islamic State West Africa Province (ISWAP) variant.

We are concerned about the worrisome revelation that international non-governmental organizations (NGOs) were caught out supporting the terrorists in various capacities. Activities that have been confirmed on the part of these NGOs include: (1) UNICEF staffers passing classified military information and intelligence to Boko Haram terrorists (2) Action Against Hunger supplying food, medication and logistics support to Boko Haram terrorists to enable recover from the degradation of their fighting capacity by the military (3) Human Rights Watch issued a pro-Boko Haram report to tarnish the good works of the military (4) Amnesty International issuing series of reports and media content to advance Boko Haram interests (5) Several other subversive activities that are yet to come to light but that are going on nonetheless.

It should be noted that these NGOs got into Nigeria and gained accreditation to the north east under the guise of doing humanitarian work to alleviate the suffering brought upon the people in this area by terrorists’ activities. The development exposed by the military has however revealed that these organizations and their staffers have done the exact opposite by engaging in activities that: (1) encourage the terrorists to continue carrying out attacks against Nigerians as well as help advance the ability of the terrorist group to recruit new fighters (2) support Boko Haram to recover whenever the military successfully degrade them (3) provide them information that allows them to be able to attempt attacks against military formations (4) whip up international anger against Nigeria and the military of the country (5) present captured or killed Boko Haram terrorists as victims such that the military is wrongly perceived as engaging in abuse (6) expose the civilian population of the northeast to Boko Haram attacks (7) the questionable NGOs have compromised the integrity of NGO work in Nigeria by contaminating indigenous NGOs and CSOs to work against the interests of the state.

It should be further noted that other serious minded organizations that would have provided actual humanitarian relief and support have stayed away from the region as they thought that their indicted counterparts are already providing such. It is logical for these serious organizations to want to avoid duplication of efforts hence their ceding the intervention work to these ones that have now been found to be criminal in outlook and intent. They have thus denied the needy of crucial help and relief that the responsible organizations would have provided. We therefore have a situation where the world believes that the people affected by Boko Haram’s acts of terror are getting the help and assistance they require when in reality those that should be providing the help are the ones sustaining Boko Haram.

It is therefore apparent that the ultimate target of the subversive activities of these NGOs is Nigeria’s democracy. They want to undermine not just the military but every institution that makes Nigeria a sovereign democracy.

Our recognition of this threat had earlier made us to call on the security and anti-graft agencies in the country to investigate and track the cash flow of these organizations. The call was premised on the need to establish how they have been supporting Boko Haram terrorists against Nigeria.

We find it expedient that the investigation of the NGOs operating in the northeast requires a comprehensive approach. While the security, anti-graft and military agencies are able to shed light on the damage they have done to peace and security, it is apparent that we need to have a profile of the larger and farther reaching consequences of activities that are targeted against Nigerians and the country on a larger scale.

As a consequence, we are demanding that the National Assembly immediately investigate the activities of international and local NGOs operating in the northeast of the country. The probe should be with a view to identifying how and why entities that do not mean well for Nigeria have been operating in the country to the extent that they were able to provide cover for terrorists. It is our belief that outcome of such probe would empower the National Assembly to mandate security agencies and the military to give proportionate response to the threat that these organizations pose to Nigeria’s integrity. 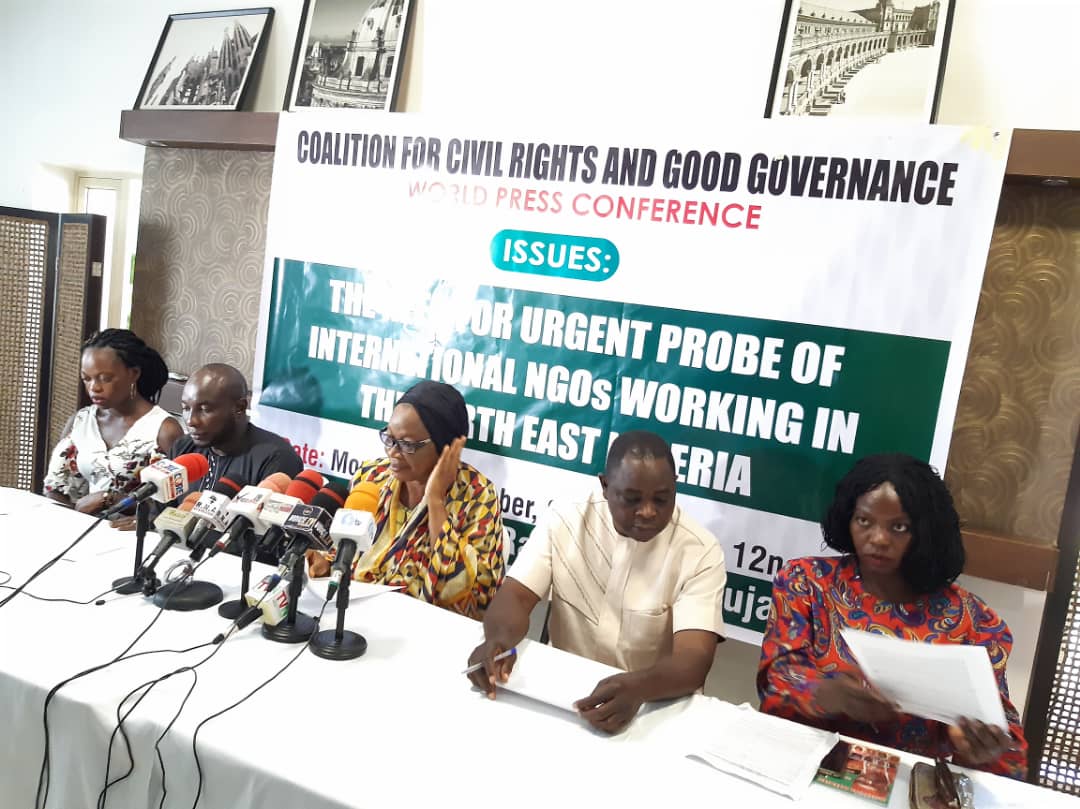 We equally believe that an investigation into the activities of these NGOs will provide insight into the areas in need of amendment where Nigeria’s legislation on terrorism, terrorist financing and national security are concerned. The investigation would also help trigger a legislation on NGO financing in Nigeria, which has been used as a front for funnelling funds that are now threatening the existing of Nigeria.

In the meantime, we demand that staffers, management and owners of NGOs that are found culpable of the serious allegations like providing funding to terrorists as being alleged in public domain should be handed to law enforcement agencies for trial.

It is our passionate appeal that even if the National Assembly members are unconcerned about the suffering of Nigerians under the tyranny of these international NGOs, they should at least look out for their own personal interests that would be imperilled if these subversive elements are able to disrupt critical national institutions as they are attempting to. Our lawmakers must take a definite stance against this threat to our nation.